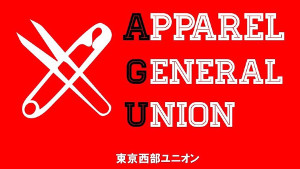 Hello to every American Apparel employees! We are “Apparel General Union”, labor union organizing apparel industry workers based in Tokyo, Japan. We have some statements we would desperately want to share with you here.

As you know, the company has decided to shut down basically all AA stores except U.S. All stores of Japan and most of Europe has been forced to close this December. Also they have laid-off 500 LA factory workers, and they are ready for outsourcing the factory over sea. No longer AA is “Sweatshop Free” nor “Made in USA”, and how can they say “Fair wages” when they are firing so many employees? Everything we loved about AA, –-one and only creative style, its’ brand & liberal policy, friendship of co-workers, ––is about to be destroyed.

During this 10years, each time the company faced danger of bankruptcy, had big money invested by investment funds,— profit became much more important than creativity and AA’s originality, company’s survival became priority than workers lives. At the end of 2014, Dov Charney was kicked out of the company, and Paula Schneider of Standard General, became the CEO. Oct.2015, AA announced to recapitalize through consensual pre-arranged Chapter 11 reorganization, —Standard General took over AA. They look at the case as a rotting fruit. To invest in a falling sales company makes juicy money for them, by investing in high interest rate, and stock trading. It’s okay if the company goes out of business as long as they are able to collect the investment. And Paula failed the restructuring and left the company Oct.2016, now they are looking for a buyer of this company,,, nobody is here to take responsibility of this mess.

Workers must not die, even though American Apparel goes Bankrupt. We will not let the company survive, on the sacrifice of worker and it’s family’s life and living. AA workers, the ones that actually work in the stores, have been serving customers with pride, wanting them to love AA brand and wear it comfortably. YOU and every AA workers, are the ones that has run AA, held AA, and created the AA brand up until today. Even if we are an irregular employed or part-time, with responsibility and pride, because we love AA, because we love our co-workers, we are the one that has been moving this company. Labor Union is here to fight for that by any means necessary!

We launched our small union in American Apparel Japan 4 years ago. The company hated on the union, and unfairly dismissed our leader Hanako, as soon as we pulled up our union flag. There was no reason making sense of the dismissal, they just wanted to kick out everybody that does not lick their shoes. In Japan, this is unfair labor practice, which is completely illegal. We fought in the Tokyo Labor Committee, collective bargaining, and on the streets! Many co-workers dug our statements and joined the movement. After 2 years struggle, WE WON! Hanako’s dismissal was withdrawn, her 2 years salary was paid, and she got back to work with her friends again, in Shibuya (JPN) store!!! We proved that if workers unite and stand up, we can do this!!! Organize your co-workers as a labor union, and fight to change the power balance with the company. It is possible.

The company should vacate the stores and the factory, if you are to destroy it, workers will take over! WE workers run American Apparel, not them! Not a single layoff is permitted!! All workers of American Apparel of the world, join us! Raise your voice together! STAND UP NOW!!!

IF YOU AGREE WITH OUR STATEMENT;

Send us your picture holding a sign banner (cardboard, piece of paper, or anything) saying “#WE RUN American Apparel!” or “#WE RUN AA!”and send it to our twitter account below. Don’t forget to tag it with #americanapparel and #WERUNAA. Wearing your favorite AA style might be even better. Let’s show the company and the world, that our international solidarity is possible!

Also, if you have any good ideas or questions, please contact us any time!!!