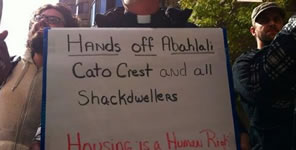 Rain is usually considered as a blessing. It is often considered as a gift from the Almighty and amaDlozi. During  the drought we were all waiting for the rain to come. But the storms in Durban hit impoverished people, and especially shack dwellers, very hard. Peoples’ possessions and homes were damaged and destroyed. Lives were lost.

In eNsimbini, which is one of our settlements, we lost two comrades as a result of the storm. The two comrades were in their shacks when they were forcefully knocked down by a landslide of builders’ rubble and buried alive in mud. The incident took place on Monday at around 15h00 pm. It was difficult to recover their bodies because they were covered by the heavy concrete rubble and mud. The remains of Mr Nkosinathi Raphael Myeki were recovered on Tuesday morning at around 8:00. The remains of Ms Ntombifuthi Prudence Sithole were recovered at 15:30 in the afternoon on Tuesday. Both bodies were discovered by members of the community who worked tirelessly digging in search for the bodies together with the eThekwini Fire Brigade who arrived on the scene at around at 2:00. Mr Myeki worked as a security officer and was preparing to go to work when the storm took his life. He leaves behind a four year old daughter. She depended on her father. Miss Sithole leaves behind two children who will no longer have a mother.
This is not the only shack settlement that was affected by the storm. Silver City in Umlazi, Kennedy Road, eKuphumeleleni (Shallcross), Foreman Road and Briardene were all hit hard. In Briardene more than twenty shacks were destroyed by the storm. In settlements with community halls people are residing in the halls at the moment. In the settlements without community halls people have to rely on solidarity from neighbours and comrades.

We hope that the eThekwini Disaster Management will treat these incidents as disasters and provide the necessary support that is required. We also call on the eThekwini Municipality and the provincial government to provide assistance to all who have been affected by the storm. We also call on the churches to provide counselling to the affected families, especially those who have lost their loved ones. Abahlali will continue to provide the necessary support to these two families in these difficult times as well as to others who have lost their homes. These are the difficult times for the impoverished in South Africa and we need to unite more than ever before in order to reject and overcome impoverishment. We need one another in this time of need. Our strength is in our togetherness.

We also advise politicians not to use the death and destruction caused by this storm as a platform to canvass for elections. These are trying times for the people who are living in shacks. We are poor, not stupid.

We as the impoverished are always affected whenever there is fire or storms but it is unfortunate that some of the media do not see this as important coverage. They are mostly concerned about the effect that the storm has caused in the economy rather than the lives that have been lost. It is for this reason that we as the movement say that our lives do not matter to this society. We did not choose to live the life that we are living.
The muncipality continues to fail to provide the infrastucture (like storm water drainage) neccessary to make our settlements safe. They continue to fail to provide decent housing for the people. Houses that are meant for the impoverished are sold by some councillors on a daily basis. Greedy politicians who only think for themselves and their families are worsening the situation.

We would like to make a call for humanitarian support to our friends, comrades and partners at this trying time. We will appreciate any support that will assist families with rebuilding their houses as well as clothing, blankets and food as the poor and marginalised try to salvage what has been left in the aftermath of this disaster.

Our deepest condolences go to the families of Nkosinathi Myeki and Ntombifuthi Sithole and to all others who have lost their loved ones at this time.