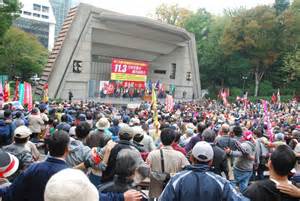 To our working-class brothers and sisters across the world

Neoliberalism has led to a rapid increase in irregular workers and indirect employment all over the world, as well as the strengthening of monopoly, the deepening of wealth polarization, more and more privatization, and the oppression of the labor union movement.

Moreover, the intensified competition among capitalist powers has brought about the impending crisis of conflict and war, especially in Northeast Asia.

Workers of the world! We, the Korean Confederation of Trade Unions Seoul Regional Council and three unions in Japan (Doro-Chiba, Kan-Nama and Minato-Godo), have decided to organize a Workers’ International Solidarity Action in November against the merciless capitalists’ oppression of the labor movement and the growing crisis of imperialist war in Northeast Asia and the Middle East.

Neoliberalism, which is controlled by the “1%” monopoly capitalists, totally deprives workers of their freedom. While the number of irregular workers and indirectly employed workers increases, public services (transportation, education, medical care, municipality, etc.) are shrinking, being privatized, and transformed into mere tools for profiteering.

Above all, the capitalists’ greed has forced the world into economic depression and the collapse of the world economy, and is drawing the world into the disaster of impending imperialist war (a world war and nuclear war).

In face of the first crisis ever to seriously threaten the survival of mankind, the international solidarity of workers is the only way to defend the world.

We workers of the world must stand together in a united struggle under the banner of international solidarity.

In 1995, South Korean workers established the Korean Confederation of Trade Unions (KCTU) to unite workers and stand in the vanguard of their struggles, overcoming the harsh repression of state power and capital that had existed on labor movements for a long period of time. Since then, KCTU has been relentlessly fighting and continuously moving forward.

The workers of KCTU keep fighting without fear even to die in their struggle. They go on strikes regardless of the risks of being fired or arrested. In fact, our comrade Han Sang-gyun, President of KCTU, recently received an unprecedented sentence of 5 years’ imprisonment and now strives behind bars. Despite such a brutal rule of the present regime that speaks only for big capital and the far right wing, the workers never waver in their efforts and continue fighting on militantly.

This coming September, workers in South Korea are preparing to wage another robust general strike led by the public sector union. Also, 200,000 workers from all over the country will gather together in a massive protest at the People’s All-out Rally in Seoul. There the working class people will vigorously launch the decisive battle to fight back against the oppressive rule of the government and capitalism. This will pave the way for further general strikes and then link up with the struggle of the presidential election in 2017. All these militant struggles will create a new turning point toward the fundamental transformation of South Korean society.

Doro-Chiba has been carrying on the struggle against the division and privatization of Japan National Railway. It was the greatest attack on the labor movement in the Japanese postwar period. But Doro-Chiba’s 30-year consistent struggle has eventually succeeded in forcing even the reactionary Supreme Court to admit that the JR and the state power itself had committed unfair labor practices. Doro-Chiba thus achieved a historic breakthrough and started a fresh fight against JR East Company for the withdrawal and reinstatement of fired 1,047 railway workers.

The Shinzo Abe government shamelessly concealed the risk of radiation from the Fukushima nuclear accident, and is forcing the evacuees to move back into their hometowns where radiation levels remain dangerously high. In order to proceed with the so-called “Reconstruction of Fukushima,” Abe is desperately trying to reopen the railway line in Fukushima. Doro-Mito, a fraternal union of Doro-Chiba, has been at the forefront of the struggle to fight against the operation of contaminated trains and radiation-exposed work through repeated strikes.

In 2010, Kan-Nama waged a general strike in the ready-made mixed concrete industry for 139 days, which violently shook the monopoly in the construction industry and the domination of big cement manufacturers. The workers of Kan-Nama made a great effort to establish a labor union in every workplace and are today still striving hard to organize hundreds of thousands of workers.

Minato-Godo organizes the workers of small- and medium-sized enterprises in its community. Minato-Godo has been working hard to take back workers’ right to organize, and has succeeded in creating a strongly fortified community that can fight together against common enemies.

Now the Abe administration has launched a full-scale attack on workers. Intent on tearing up the pacifist clause of the Constitution and rushing head-on into war, Abe moves forward with further revising labor laws that force all workers into a state of unstable employment in the name of “Working-Style Reform.”  We are determined to stand up against the ruthless attacks of the Abe government. We hold a National Workers’ Rally on November 6th and join our forces in an all-out effort to fight back.

The danger of nuclear war in Northeast Asia is imminent. The international solidarity between Korean and Japanese workers forged since the November Rally in 2003 is now more important than ever before. We believe it is vital to expand this into a worldwide workers’ solidarity movement. Therefore, we will link the Workers Rally in Tokyo on November 6th with the Workers’ Rally/People’s All-out Rally in Seoul on November 12th and November 13th, and ask you all to join these rallies in both countries. The capitalist assault on the working class transcends borders and has common features all around the world. Our enemy is one and the same. The working class of the world must be united to overcome every attempt to divide us. Join us in Japan and South Korea in a union of workers across races, nationalities, and borders! Let us launch a movement for fundamentally transforming society that has plunged into economic depression, large-scale unemployment, poverty, and war!

There will be study session(s), visits to labor union(s) of your industry or craft, visits to site(s) of labor dispute etc. during your stay in Japan and Korea from November 5 through 13. Details will be communicated later.

We, the Japanese and Korean host unions undersigned, bear all your expenses necessary in Tokyo and Seoul, although it is difficult for us to cover your airfare.

In case you cannot make all of the events above, please do not hesitate to inform us.